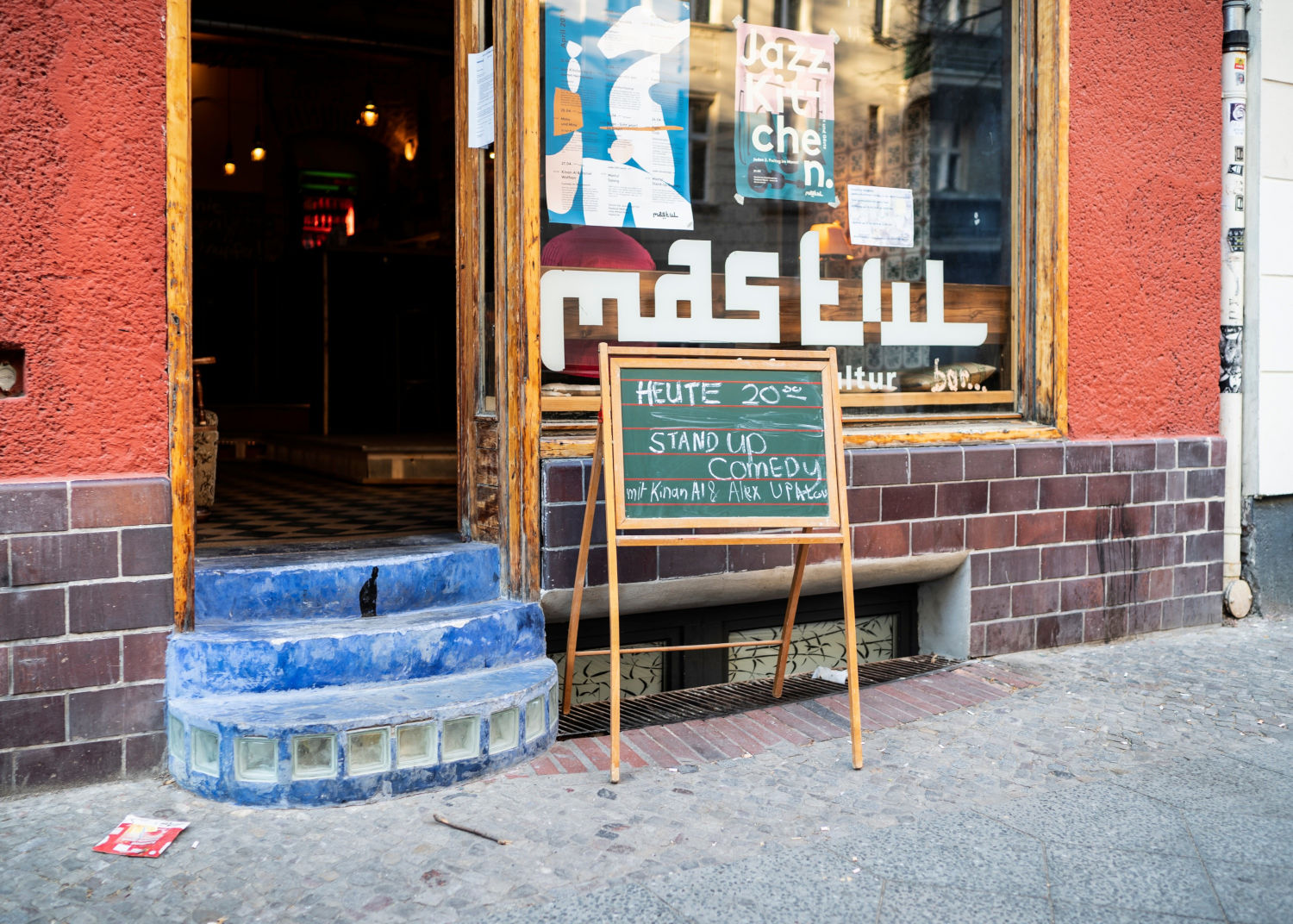 Hot to become a good comedian

In December 2001 the team of the Harald Schmidt Show built a model railway in the studio in Cologne-Mülheim: the station of Nürtingen, a small town in the state of Baden-Württemberg. The model is supposedly true to scale. The boss spent his childhood and youth there and went to the Hölderlin Gymnasium, a secondary school. Schmidt speaks for almost an hour about people from the respective region Swabia, the railway, departure times, shows details in the model with a pointer stick. These are trivialities. If it were for another presenter, people would have changed channels. But it is Harald Schmidt, after all, and he has everyone listening. He sets punchline after punchline, impressively improvised or at least ingeniously crafted. „Germany's most brutal, smartest, most poisonous, most self-confident, most self-righteous, best talk show presenter“, the German weekly „Die Zeit“ called him once. Even though some ideas were shamelessly copied from talk masters like Conan O'Brien, one has to admit: If there has ever been anyone who has advanced humour in Germany, it is probably Harald Schmidt.

In a column for the weekly „Focus“ almost 20 years ago Schmidt made fun of seminars promising to teach interested people how to write jokes. He wrote: „You can't learn to joke.“

Schmidt thus outlines the view that has long prevailed in Germany: being witty is an instinct. You can do it  – or not. In the USA it's different: There's tons of literature about how to construct a gag. At drama schools you can take courses in stand-up comedy and work on timing and emphasis. Americans do believe that you can learn to joke.

The two humor cultures coincide in one thing: the experience factor. The true comedy school, writes Harald Schmidt in the column, is the „Schützenhaus in Hankensbüttel“ or the „Soldatenheim in Kempten“. The small stages. You don't become an entertainer on television. „The hard slog cannot be replaced by anything, especially not by weekend courses with failed people.“ 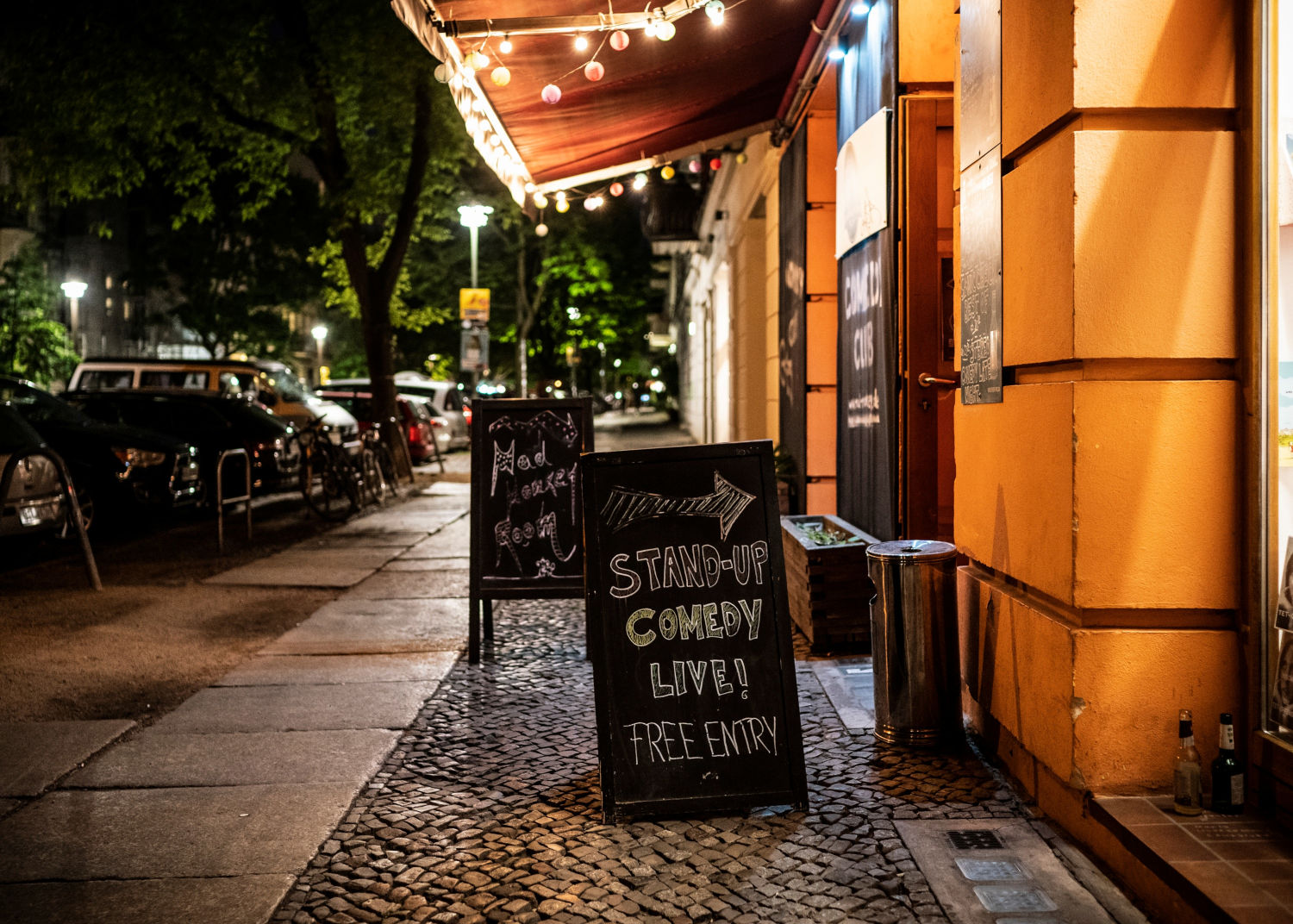 There it is again, the failure. Everybody bombs, this applies both to entertainers and stand-up comedians. Certainly also Schmidt used to bomb. Bill Burr might have stood there with trembling knees like the 17-year-old at the Ja&Weiter show, Louis C. K. has probably got himself muddled. Everybody bombs. Without exception. Only, after bombing, the professionals have continued, or differently put, only because they have continued for decades, they have become the stage animals they are today.

They only have absolute control on stage because they were willing to put their gags to painful tests over and over again. Painful for the audience (in the form of uncomfortable silences, malaise, famous German Fremdscham), and painful for themselves (in the form of rejection and the insight that they may not be funny after all). Nothing is just funny. Nothing is just tragic. In the movie Funny Bones a character puts it straight: „I never saw anything funny that didn't cause pain.“

If you fail on stage, you're not a bad comedian. You're a real comedian only if you failed  – because that means you were out there. 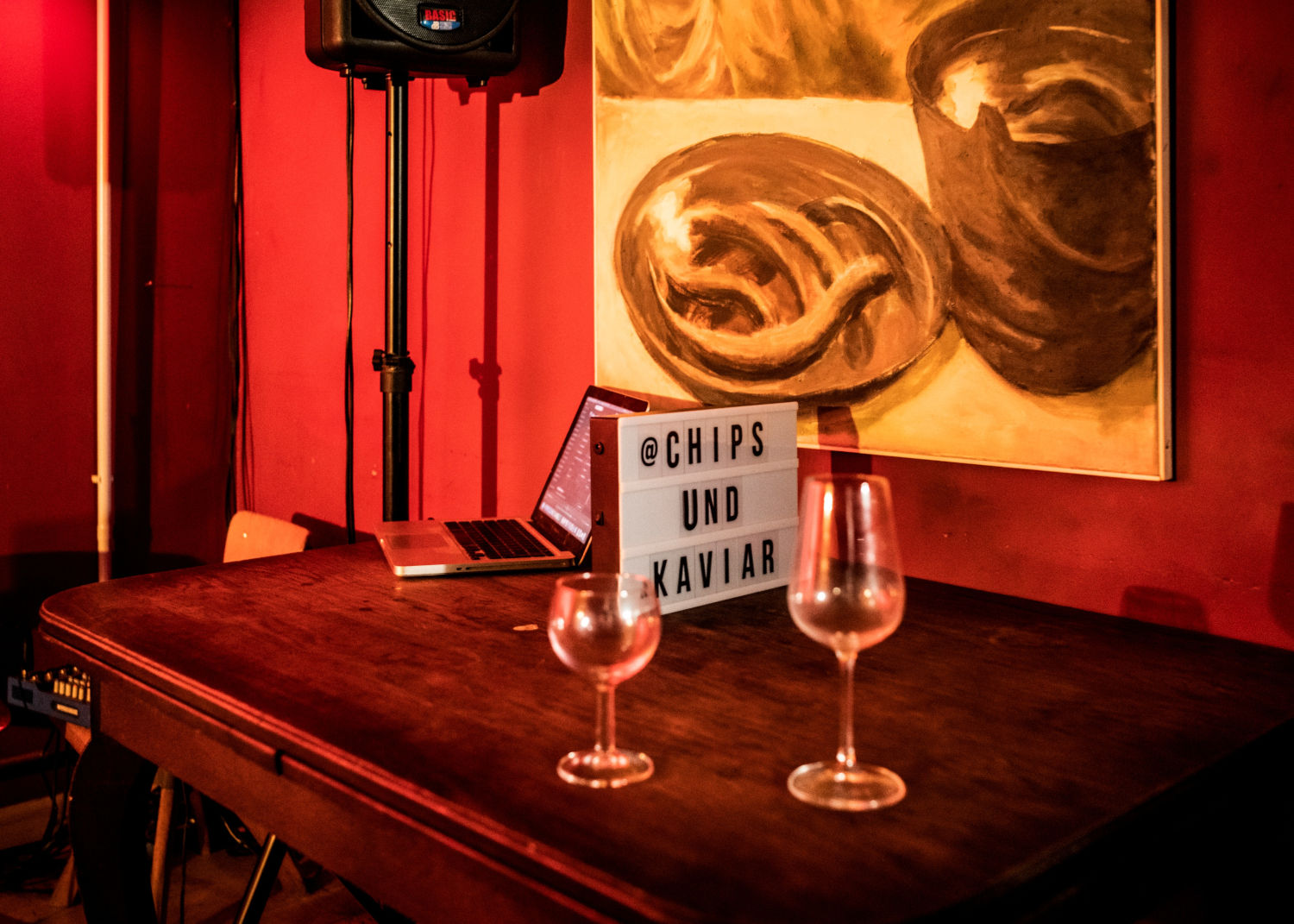 In Berlin, failure and success can be observed particularly well. Because there are so many shows, an artist can play two, three or four times on a single evening. Here you can meet a young woman who is about to make the leap from a seven-minute spot to her own full-length comedy special.

Neukölln, a Sunday evening in November. Shortly before 7 pm in the Oblomov bar people line up in front of the door to the adjacent room, in which three dozen chairs are waiting, a spotlight, a red wall, a microphone stand. There is no stage. The series is called Chips und Kaviar and a handful of comedians are about to perform, among them Erika Ratcliffe. In 2016, she moved from Vienna to Berlin because that's where there are the most opportunities to perform. Now she plays several times a week. (For instance at Stereo Comedy or at the stand-up show at the Mastul, as shown in our pictures.) 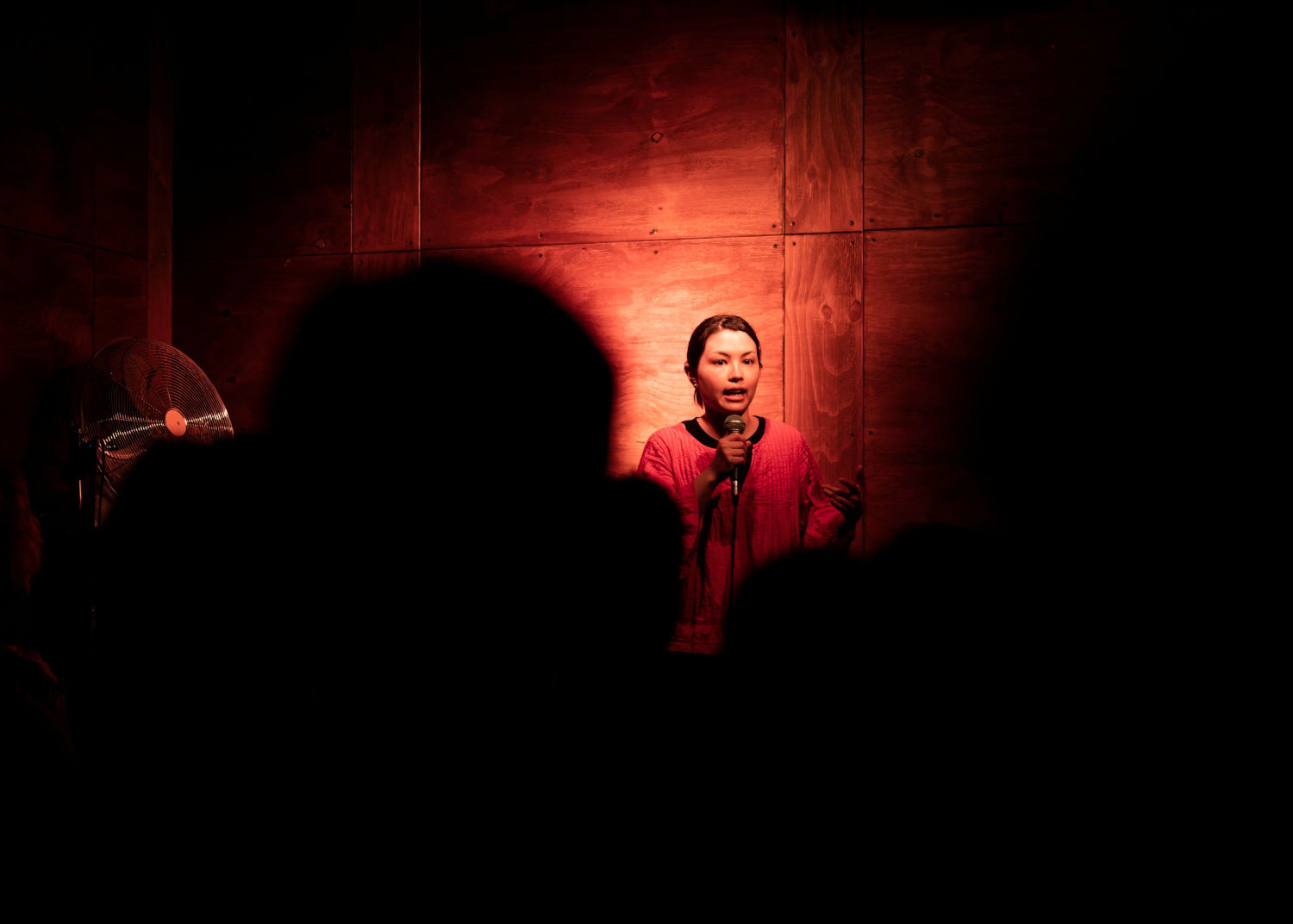 At the Oblomov, Ratcliffe comes forward with, backpack and laptop bag, puts them down at the edge and grabs the microphone from the stand. She pulls her sleeves back, leads the microphone to her mouth, takes a breath. She pauses and lets her gaze glide over the audience.

„Hello, my name is Erika Ratcliffe. I am from Vienna“, she says.

„I am half Japanese, half Austrian. That means my life sucks.“ First laugh.

Ratcliffe talks for eight minutes: about too many Asians standing at the supermarket checkout at once („We just have to spread out better“), about Asians talking loudly „in Asian“ on the phone in the train, about people using the word „onanate“ instead of „jacking off“. („Those who onanate, listen to Beethoven while doing it“) She says, she is getting panic attacks in „crowds just like here“. But a friend gave her some good advice: „Just say allahu akbar and people will run away.“ From there she is going to terror attacks and how it is impossible to prevent them. If she were a politician, she says, she would use the slogan: „Erika Ratcliffe. Terror. So what?“ Applase and laughter, though not roaring. 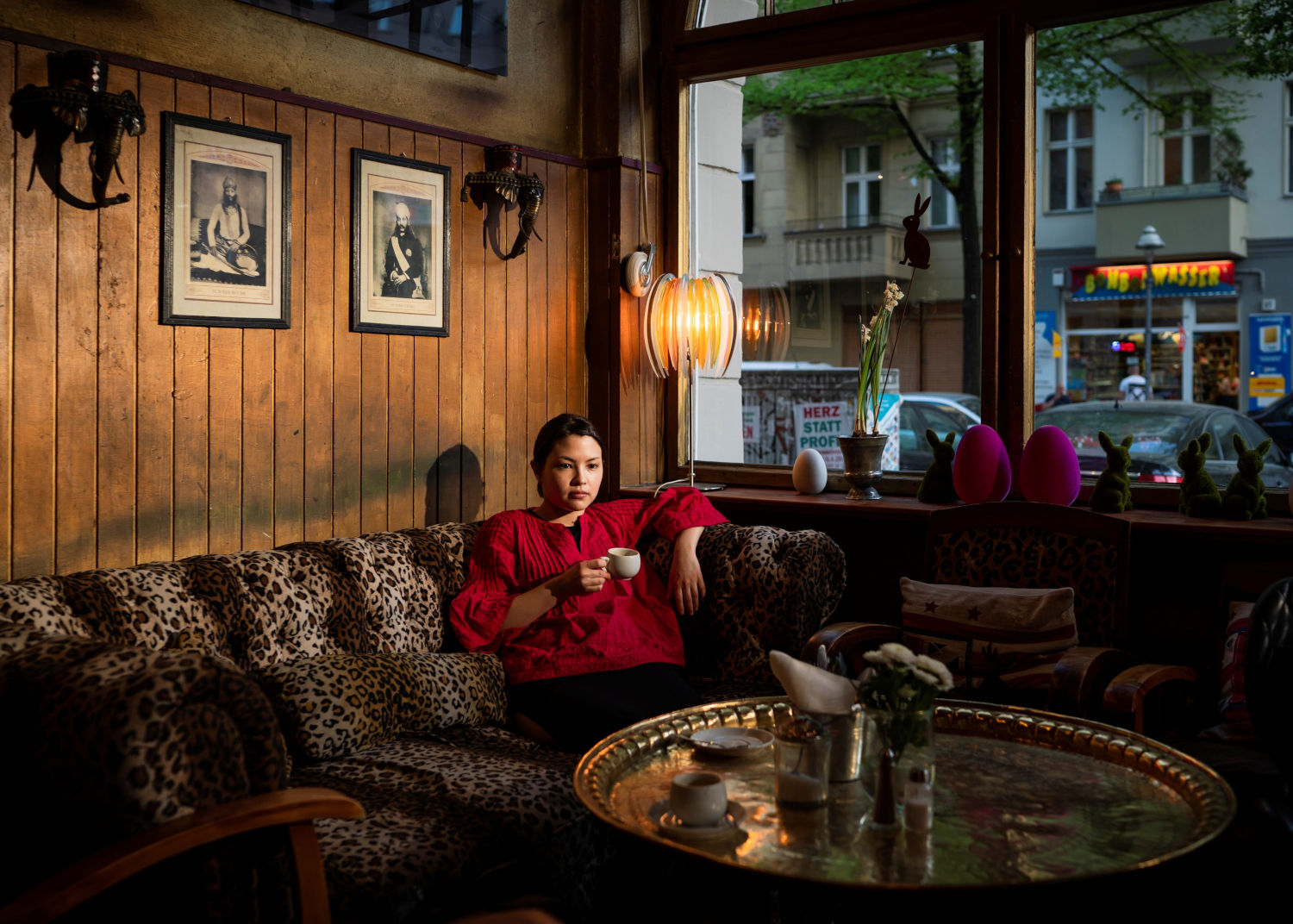 Ratcliffe's topics come from her everyday life. She is not interested in the classic political joke. The circle in which she moves: „That's 99 percent polyamorous, left-liberal flea market sellers, we all agree on everything anyway.“ Jokes about Trump would just bring applause by means of distinction and sympathy. Well, why are there so many, after all? „People just want to hear those“, says Ratcliffe. But when you listen to this kind of joke, you can often anticipate the punchline. And expected jokes are hack, which means crap or boring in stand-up jargon. „When it gets surprising, it gets funniest“, says Ratcliffe. Not too confusing, but fresh. „It's about thinking about topics you wouldn't otherwise think about.“

A big difference between political Kabarett and stand-up comedy: the Kabarettist sees politics as party politics, as intrigues to be denounced. He deals with politics because it is important . Because the world is not good. It should be different, but the suits, „those up there“, prevent it from happening. A message that one can naturally use as a premise of many jokes. Whether these jokes then are surprising or sort-of-original is another question.

If the political Kabarett had to be brought to a formula, it could be: They don't make it easy for us and we can't change anything about it  – you can only laugh about that.


„Why wouldn't it be political when women talk about how they are strong, or men about how weak they are or how they have erectile disorders?“
The stand-up comedian is also politically  – but not by denouncing the news or by appearing as voter of any party. It is political when someone reports about their life as a woman, about their life with a migration background. Anyone can denounce the lack of equality. But only a woman can make jokes about it from her own experience. Everyone knows that racism is just wrong. But Ratcliffe makes jokes about her Asian appearance and racism, because both belong to her world.

Stand-up comedians always speak „as X“ to the audience. As nerd. As a person with a migration background. As a privileged, white person. As a black person. As a mother. As dyslexic. As a lesbian. As a pupil. Politics, as well as jokes, comes to the set from the person.

Countercheck: What did Harald Schmidt once speak as? As a Swabian, of course, as a wearer of glasses. It didn't get any more existential with Schmidt. He is an entertainer with great timing and a unique feeling for punchlines. But he always floated above things. For his show he took an American format, depoliticized it, reflected on it, played with meta-levels, hired joke writers. It was the parody of a parodic format. As a person, Schmidt was hard to grasp. In this sense, Jan Böhmermann, who makes a funny TV show and a funny podcast and who is known for his witty remarks on Twitter, is a direct descendant of Schmidt.


Kabarettisten have a concern,
stand-up comedians live their lives
Schmidt spoke as a commentator, and Kabarettisten like Volker Pispers speak: as Kabarettisten. So to say: Let's leave everyday life behind us for a moment, we're talking about something important here. The jokes go straight to the brain and are decoded there. The fact that everyday life can also be very important is omitted.

After the performance at the Oblomov, Ratcliffe squeezes herself into a car with other comedians and artists. It's four miles to the next performance, at the Zosch in Central Berlin. In front of the windows landmarks pass by, the Kottbusser Tor, the Rote Rathaus, the Hackesche Markt. Inside: exchange of the craftsmen and -women. Which stages do provide good energy, which organizers let things slide?

A free parking lot, a few meters in front of the entrance. The show has already begun, it is called Aufstand Comedy. The show is well-attended, 40 guests have come together in a vaulted cellar. 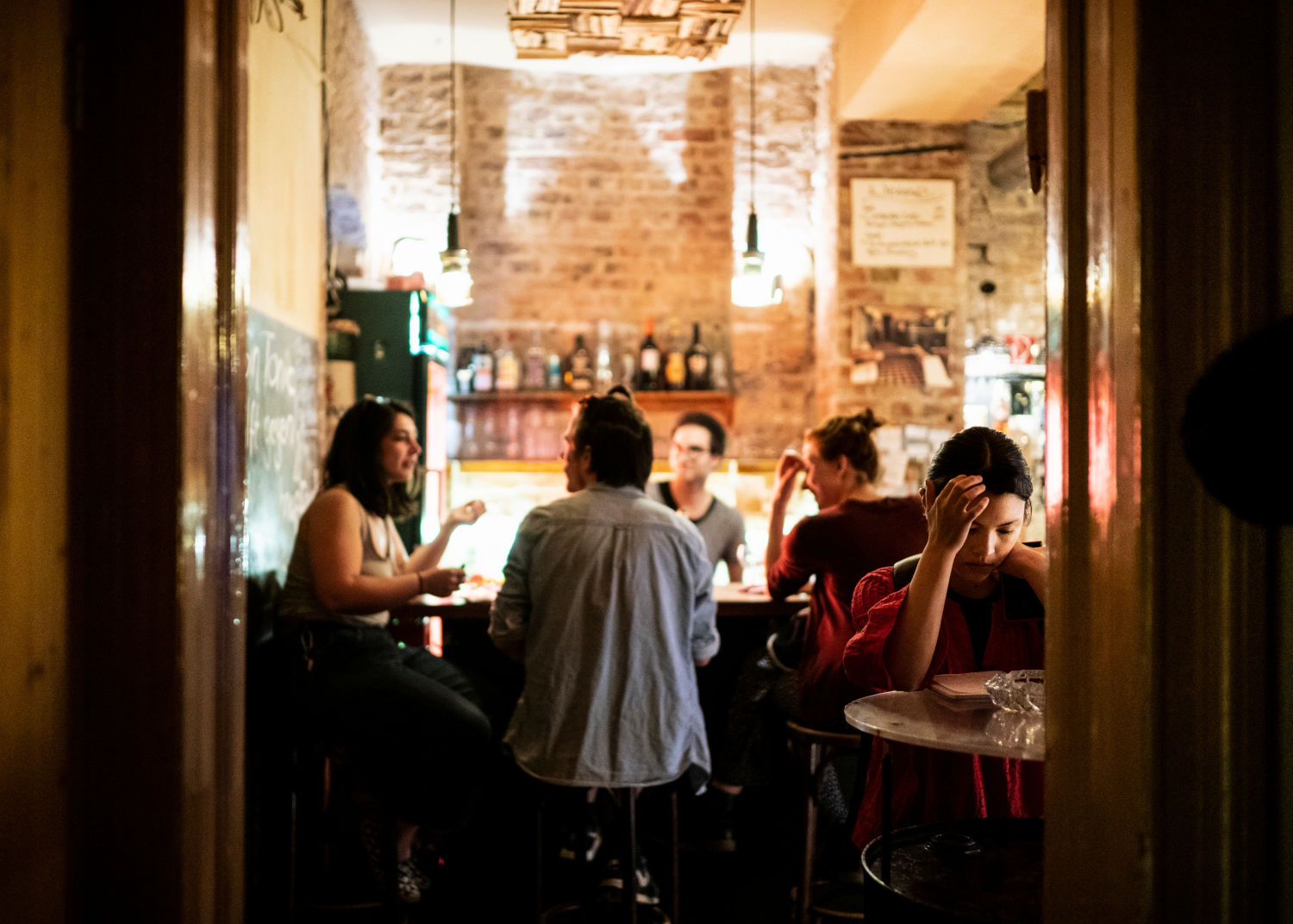 Ratcliffe is in no hurry. It is her turn after the break. She does not drink, stands behind, in front of her on the counter a college notepad with notes. She takes a look at what is happening on the stage. If she finds something good, her bright laugh sounds through the room. Then she tilts her head down, writes down a thought, sometimes on paper, sometimes on the back of her left hand. A cheat sheet for the performance.

This time she's telling different jokes. For example: Her Japanese mother once proudly told people that she was together with a successful sumo wrestler. „Mom, that's nothing to be proud of here in Europe“, says Ratcliffe she said to her mother. „When you say that around here, it means you hooked up with a fat guy in a thong.“

She's trying out, too. Sometimes the performance is not yet round and sometimes complicated. It's a risk comedians like Ratcliffe take. But because a crowd can't disguise their opinion, the risk is always rewarded with honest feedback. With laughter  – or with silence. Ratcliffe keeps what brings laughs in the repertoire. Everything else will be reformulated. Or kicked out.

One gag becomes two, several gags become a bit, that means a topical unit, bits become a set. Minute by minute is accumulated. At the beginning of the year Ratcliffe started playing her solo program „Geil“ in Vienna. She also has an agency now. The agency calls „Geil“ a „homage to her short turbulent life“. Stories about men, women, panic attacks, love, racism „and actually about everything“.